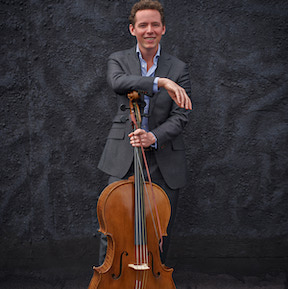 Keiran Campbell
Cello
Keiran Campbell was drawn to the cello after he stumbled across one in his grandmother’s basement and was baffled by its size. Once he turned 8, he began taking lessons—on a much smaller cello—in his native Greensboro, North Carolina. After studying extensively with Leonid Zilper, former solo cellist of the Bolshoi Ballet, he received his Bachelors and Masters at the Juilliard School, working with Darrett Adkins, Timothy Eddy, and Phoebe Carrai. Keiran also spent several springs in Cornwall, England, studying with Steven Isserlis and Ralph Kirshbaum at Prussia Cove. He is now based in Toronto, Ontario, and is principal cello in Tafelmusik Baroque Orchestra.

Keiran has performed with orchestras including The English Concert, NYBI, Philharmonia Baroque, The Boston Early Music Festival Orchestra, Mercury Baroque, and Le Concert des Nations. During the summer, Keiran plays in NYC with Teatro Nuovo, an opera company dedicated to performing bel canto opera on period instruments, and he also performs at Lakes Area Music Festival in Minnesota. Keiran has given lectures and masterclasses at UNC Chapel Hill, RNCM Manchester, Western University, and the National Academy Orchestra of Canada. Performances this season include concerto appearances with Tafelmusik and Philharmonia Baroque Orchestra, a concert of Monteverdi Madrigals with Jordi Savall and Le Concert des Nations in Carnegie Hall, and performances at the BBC Proms and Edinburgh Festival with The English Concert. He can be heard on the newly released recording of Beethoven Symphonies by Le Concert des Nations and Jordi Savall.

Keiran is also fascinated by instrument making, which he studies with the maker of his cello, Timothy Johnson.