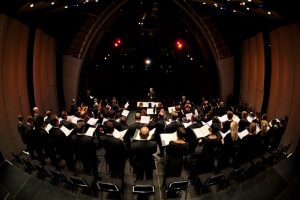 Bach’s Passions are deeply embedded in the Carmel Bach Festival DNA, and the Festival is proud to continue the tradition by presenting St. John Passion in 2020.

The oratorio Passion—comprised of Biblical texts enhanced by lyrical arias and chorales—was a relatively new form when Bach created the St. John Passion in 1724. The Passion begins with one of Bach’s finest choruses, “Herr unser Herrscher.” It is one of the great beginnings in all of music. The New Yorker’s Alex Ross has said regarding this chorus: “Whatever images come to mind, the craft that went into the making of the scene—the melodic inspiration, the contrapuntal rigor, the immaculate demonstration of the rules, the insolent breaking of them—is as astounding now as it must have been on that day in 1724 (when St. John Passion premiered). One notable fact about the St. John Passion…is that we have no eyewitness account of the première. If the good people of Leipzig understood that they were in the presence of the most stupendous talent in musical history, they gave no sign.”

These performances will utilize period instruments at Baroque pitch, offering Carmel audiences a similar experience as the congregants at St. Nicholas Church in Leipzig in 1724 at the work’s premiere. The performances will be presented in concert dress.

“With this year’s performance of the St. John Passion we continue our cycle of bringing the great Bach choral pieces to you on period instruments,” said Paul Goodwin. “Once you hear the biting yet melancholy sounds of the baroque oboes and the earthy tones of gut strings in the most powerful of Bach’s opening choruses, you will never be the same again!”

Minnesota-born tenor Thomas Cooley has established a reputation on both sides of the Atlantic—and beyond—as a singer of great versatility, expressiveness, and virtuosity. Cooley studied at DePauw University, the University of Minnesota and the Richard Strauss Conservatory. He is an Artist in Residence with Chicago’s Music of the Baroque. This season marks Thomas’ ninth in Carmel. Thomas will perform the role of the Evangelist in the St. John Passion. You can also hear Thomas on the Saturday Main Concerts, and the Monday chamber program at All Saints’ Church.

Mezzo-soprano Meg Bragle returns for her fourth Carmel Bach Festival season as a soloist. She was a Virginia Best Adams fellow in 1999. Widely praised for her musical intelligence and “expressive virtuosity,” Meg has earned an international reputation as one of today’s most gifted and versatile mezzo-sopranos. She is the recipient of awards and recognition from Symphony Magazine, the American Bach Society, and the Bethlehem Bach Festival. A frequent featured soloist with Sir John Eliot Gardiner and the English Baroque Soloists, she has made four recordings with the group. You can also hear Meg on the Saturday Main Concerts, and the Monday chamber program at All Saints’ Church.