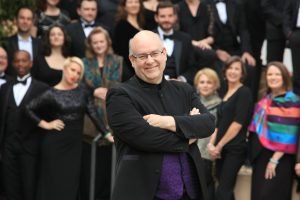 The Seven Last Words from the Cross is regarded as James MacMillan’s masterpiece. The composer’s deep faith is overtly present in this mesmerizing and deeply moving music. In the Carmel Mission Basilica, the emotional impact of MacMillan’s work will be intense.

Composed in 1994 for choir and string orchestra, MacMillan was inspired by Bach’s Passions, hymns, Gregorian chant, and even Scottish song. He juxtaposes the vivid text based on Christ’s final words with passages of quiet inner reflection to form a powerful dramatic narrative. The haunting score features extraordinary passages, yet it is MacMillan’s use of silence that might be the most potent aspect of the work. This is music of extraordinary musical and emotional depth, and will move audiences with its majesty, intensity, inventiveness, and originality.

The program will also include settings of related texts by two of the greatest English Renaissance composers, William Byrd and Thomas Tallis, an excerpt from Alberto Ginastera’s Lamentations of Jeremiah, and Randall Thompson’s iconic Alleluia. The traditional candlelight chant processional and recessional will bookend these extraordinary concerts at the Carmel Mission Basilica.

“James Macmillan is one of the most eloquent and profound composers of our time,” said Associate Conductor Andrew Megill. “And it is a joy to introduce his masterpiece, The Seven Last Words of Christ on the Cross, to the Carmel Bach Festival family. Like most of Macmillan’s choral music, it is  modeled on the music of the J.S. Bach. Like Bach’s Passions (which concern the same subject matter), Macmillan’s cantata is grounded in the composer’s own personal faith, but transcends any specific theology to communicate universal truths of human experience. I find the work to be deeply moving and transcendently beautiful.”

Andrew Megill is the artistic director of Fuma Sacra and serves as chorusmaster for the Montreal Symphony Orchestra. He is also music director of Masterwork Chorus and professor and director of choral activities at the University of Illinois. He is in his 13th season as associate conductor of the Carmel Bach Festival and director of the chorale and chorus.