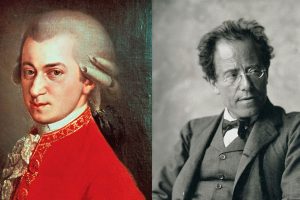 From the Storm and Stress first half to one of the gentlest and most peaceful endings in the orchestral repertoire, Tuesday’s concerts cover it all.

Mozart’s Symphony No. 40 begins with one of the composer’s most famous melodies, and thrusts the listener into the minor key that dominates the work. The symphony, like many later works from Mozart, is intense and complex, and clearly points toward the Romantic era and Beethoven. It also showcases the composer’s interest in the artistic movement known as Sturm und Drang (Storm and Stress), in which darker and stronger emotions predominate.

Mahler’s Symphony No. 4 is perhaps the lightest and most approachable of his ten immense symphonies. It’s his shortest work, and uses the smallest orchestra. Yet the passionate emotions that are Mahler’s trademark propel the symphony from its opening melody, said by the composer to express “a dewdrop on a flower before the sun shines into it.” The second movement is a surreal scherzo featuring an extended violin solo with the instrument tuned a step higher than normal— a sound which Mahler associated with a street fiddle. Mahler thought of the third movement as his prettiest slow movement, and it is easy to conjure the image of the composer rowing on the lake by the new summer home he had just moved into when creating the work.

The symphony’s conclusion, the song “The Heavenly Life,” is an ethereal and sublime song for soprano expressing a child’s view of heaven in an extraordinarily peaceful and innocent setting. “The angel voices enliven the senses, so that everyone awakes for joy,” the soprano sings as the concert comes to a serene conclusion.

“This program juxtaposes Mozart’s most dramatic symphony with a child’s view of heaven in Mahler’s 4th,” said Paul Goodwin. “This concert takes you on an emotional journey starting with high drama and ending with quiet beauty.”

Mhairi Lawson returns for her fifth Carmel Bach Festival season. While a student at the Guildhall School of Music, Mhairi won the International Early Music Network Young Artists Prize, which led to her first recording. Mhairi has performed in opera houses and concert halls worldwide such as English National Opera, The Gabrieli Consort and The Scottish Chamber Orchestra.  Mhairi will perform the ethereal solo that concludes Mahler’s Fourth Symphony. You can also hear her on the Saturday and Sunday Main Concerts and the Monday chamber concert at All Saints’ Church.