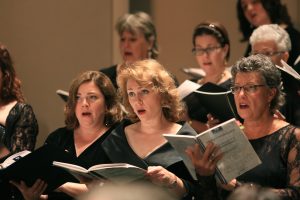 Bach’s Magnificat opens the 83rd Festival in a blaze of glory! A jubilant tone is set by an unusually large ensemble, with five soloists, five-part choir, trumpets, timpani and full wind section. Its splendor anticipates the great choruses that came later with Bach’s B-Minor Mass. During the 30-minute work, you are taken on a musical journey through ten verses and a Gloria with musical lines that somehow always seem ascend. The rhythmic energy of the opening and closing choruses sets a perfect, joyful and boisterous tone to kick off the 83rd Festival.

Rossini’s Stabat Mater shares the emotional depth and musical style of the composer’s nearly 40 well-known grand operas. Rossini combines his operatic genius with the grand tradition of sacred music, infusing the piece with great theatrical drama very much in the tradition of Bach’s Passions. The libretto inspired composers from Pergolesi to Verdi to compose their own versions and Rossini brings the full weight of his compositional prowess to the Stabat Mater. He unites different forms from arias, duets, and quartets to a cappella chorus in this powerful work that encompass a wide range of emotions from tragic to hopeful.

The text is fashioned as a prayer describing Mary’s pain. The vivid language, a Latin poem probably from the 13th century is set in ten movements. From peaceful reflection to the immense waves of sound in its closing fugal Amen, Rossini’s Stabat Mater is a monumental work of sacred music in the Romantic era.

“Our Saturday concert takes the listener on a journey from the rhythmic energy and vocal punch of Bach’s Magnificat to the extraordinary operatic vistas of Rossini’s greatest choral work, Stabat Mater,” said Artistic Director Paul Goodwin. “This is a concert of two worlds and two contrasting beauties.”