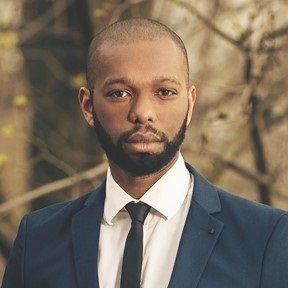 Jonathan Woody
Baritone
Jonathan Woody is a versatile and sought-after musician who works primarily as a performer of early and new music. An accomplished bass-baritone, Jonathan performs regularly with the Grammy®-nominated Choir of Trinity Wall Street, and with ensembles including TENET Vocal Artists, the Clarion Music Society, and the Washington Bach Consort. In recent seasons, he has performed as soloist with leading historically-informed orchestras, including Portland Baroque Orchestra, Tafelmusik Baroque Orchestra, the Boston Early Music Festival, and Apollo’s Fire. Pre-pandemic highlights include Handel’s Samson with Pacific MusicWorks (2019), Handel’s Messiah with the St. Thomas Choir of Men & Boys and New York Baroque Incorporated, and Monteverdi’s L’Orfeo with Apollo’s Fire (2018).

Established in the world of new music as a performer and composer, Jonathan has premiered or performed new works in recent years by Ellen Reid, Missy Mazzoli, Ted Hearne, and Du Yun, among others. He has appeared on stage with Opera Lafayette, Beth Morrison Projects, Opera Idaho, the Staunton Festival, and the PROTOTYPE Festival, among others. His works and arrangements have been commissioned and performed by the Choir of Trinity Wall Street, Lorelei Ensemble, the Handel and Haydn Society, and the Cathedral Choral Society of Washington, DC. Jonathan is committed to racial equity in the field of the performing arts, and currently serves on Early Music America’s Task Force for Inclusion, Diversity, Equity and Access.

Jonathan is dedicated to a belief that the arts have the power to effect great change in society, and that equitable representation of the diversity of American life is tremendously important in achieving such change. Currently based in Brooklyn, NY, Jonathan holds degrees from McGill University and the University of Maryland, College Park and is represented by Miguel Rodriguez of Athlone Artists. www.athloneartists.com/artists/jonathan-woody/