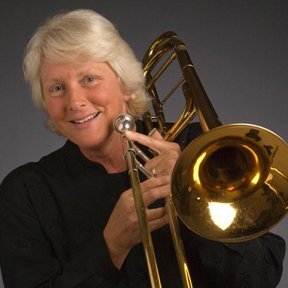 Suzanne Mudge
Tower Music Director; Trombone; Director of Community Engagement
Suzanne Mudge joined the Carmel Bach Festival as Director of Community Engagement in September 2015. Sue has been a performer at the CBF for many years. In addition to playing trombone and sackbut in the festival orchestra, she directs Tower Music and community outreach concerts and is the music librarian. Sue also creates and curates the The Epic Adventures of Leonard and Rasmus, a family series of interactive and educational concerts. In addition to performing, Sue coaches the Youth Music Monterey Brass, maintains a private teaching studio, and conducts clinics and brass coaching in the area schools.
Prior to joining the CBF administrative staff, Sue taught at Central Oregon Community College and The Seven Peaks School in Bend, Oregon, and performed with the Central Oregon Symphony, the Eugene Symphony, and the Bend Brass Quintet. Prior to her move to Bend, Sue was a freelance musician and music educator in the San Francisco Bay Area. She performed with the Women’s Philharmonic in San Francisco, the symphonies in Modesto, Fremont, Marin, Berkeley, and San Jose, and was the band director at Lowell HS in San Francisco. Sue grew up in Laguna Beach, has a B.M from The UOP Conservatory of Music, a M.M. from the University of Arizona, and a teaching credential from Notre Dame de Namur University. Sue has a passion for film music, the beach, California native trees and plants, animals, cooking, and wine.