The Good Friday tradition of reciting the biblical story of Christ’s final day originated in the earliest days of the Christian liturgy. Originally, a single deacon would chant the text, but as style and settings evolved, different singers came to chant the words of the Evangelist, Jesus, Pilate, the High Priest, Peter, and the other characters, and a group delivered the crowds’ words.

In the sixteenth century, Martin Luther asserted that music should be the partner of theology, encouraging the Lutheran church to embrace music as an increasingly important part of the liturgy. Further, by translating the Bible into the German vernacular, Luther made it possible for congregations to appreciate biblical texts. By the end of the seventeenth century, the structure and style of the German Oratorio-Passion had become more elaborate and began to include instrumental accompaniment, solo and choral settings of original poetry, and familiar chorale hymns, all intended to enhance and embellish the narrative. 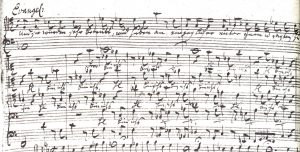 In Bach’s monumental Matthäus-Passion, this long tradition unquestionably culminates. The massive yet delicate work, with its multiple levels of theological and mystical symbolism, its powerful and dramatic biblical teachings, and its psychological insight, is one of the most challenging and ambitious musical compositions in the entire Western tradition.

A church or court employee all his life, Johann Sebastian Bach served as choirmaster of the Leipzig boys’ choir school and also oversaw the weekly musical activities in Leipzig’s four churches from 1723 until his death in 1750. It is worth noting that in his lifetime Bach was known primarily as an organ virtuoso, not a composer: he published fewer than a dozen of his compositions, and only one – a small cantata – was a choral work. The only listeners who heard the St. Matthew Passion during Bach’s lifetime were the congregants in the churches he served. It was first heard in the Good Friday afternoon service of 1727, and was performed only a few more times, always under Bach’s own direction and with his apparently meager ensemble of church musicians.

An indication of the special regard he held for this work is that Bach went to considerable trouble in his old age to repair the large manuscript score of the St. Matthew Passion. This presentation-quality copy, still in existence today, is unique among Bach manuscripts: he designed it beautifully, painstakingly bound and resewed it by hand, and carefully highlighted the biblical words in red ink. Those few who saw it after Bach’s death considered the manuscript unperformable and left the huge work unpublished and unheard until 1829 when the twenty-year-old Felix Mendelssohn organized a performance, heavily abridged, in Berlin.

The St. Matthew Passion is Bach’s grandest musical composition. It calls for two separate orchestras and choirs, which all perform together and separately throughout. In the openng and closing movements of Part One, the sound of the full orchestra and chorus is enhanced by a separate, haunting melody, often sung by children’s voices.

In most movements, including eleven of the fifteen arias, only one orchestra accompanies. Each chorus sings alone at times, but more often both sing in unison, counterpoint, or antiphony. This not only varies and enhances the texture of the music, it also emphasizes the dialogic character of the poetry.

The libretto of the St. Matthew Passion combines freely composed poetry and hymn verses with chapters 26 and 27 of The Gospel According to Matthew. In the biblical text, vocal soloists portray Jesus, Pilate, other individual characters, and Matthew the Evangelist, delivering their narration and speeches as recitative. Just the harpsichord and cello continuo accompany most of the recitations, but to the words of Jesus, Bach adds a “halo” of expressive string accompaniment. Only at the moment of Christ’s death does this halo fall away, and Jesus utters his poignant final “Why have You forsaken Me?” accompanied by continuo alone. The choruses take the group roles of angry crowd, priests and other officials, and so on. Bach’s settings for their words can be far more elaborate than the recitatives for individual characters.

At significant points in the story, Bach freezes the scene and inserts a contemplative moment for soloists or choir, or for both in dialogue. Christian Friedrich Henrici, a Leipzig poet known as Picander, wrote the texts for the four magnificent choral movements that open and close each half of the Passion and for all the arias, plus the recitatives paired with them. In these meditations, the singers do not depict actual characters in the narrative, but rather comment introspectively on the meaning of the events, often explicitly inviting the listener’s heart to become involved in the unfolding drama, to react to it and be changed by it. This skillful and repeated invitation to the listener actually to join the story is a crowning touch of Bach’s genius, and it is this element above all which makes the entire work so moving and powerful.

The chorus plays yet another role in the chorale movements: it steps outside the action and reacts to the story, like the chorus of a Greek tragedy. For these interludes, Bach uses hymns with words and tunes familiar to his congregation. He occasionally even combines text from one hymn with the tune from another, inviting the listener to consider multiple simultaneous messages. Twelve of these chorales stand fully on their own musically, in Bach’s increasing righ and complex harmonizations. Bach also uses chorales in other movements, including the tenor solo “O Schmerz!” and as melodies within the opening and closing choruses of the first half. In his brilliance, Bach inserted the chorales at specific and precise moments, to provide commentary at significant spots in the story and to create a sense of a community response to biblical events.

The most rewarding way to encounter this work is to follow along closely as Bach unfolds the story and repeatedly draws the listener in, through the interplay of ideas, words, and music. This musical masterpiece of profound spirituality transcends its eighteenth-century roots as Lutheran liturgical music, and speaks to us of conscience, courage, compassion, acceptance, and hope. In this way, the music and message belong to people of all eras and faiths.